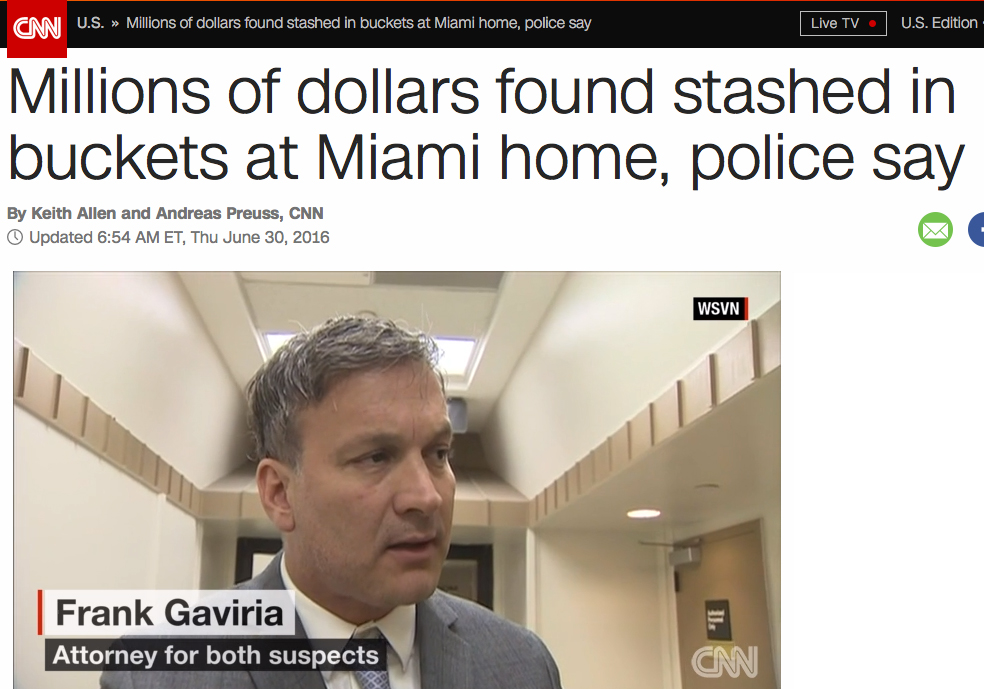 Authorities found millions of dollars stashed inside buckets hidden in attic walls, along with drugs and a gun, during a search of a home in the Miami area.

Between $10 million and $20 million in cash was found after a search of a business and a home, according to arrest documents from the Miami-Dade Police

MIAMI (CBSMiami) – Miami Lakes Mayor Michael Pizzi mugged for the cameras and worked the crowd Wednesday night before the town council requested the Florida Department of Law Enforcement conduct an independent probe of his crash with a tree in June.

Witnesses said Pizzi left the scene for at least 45 minutes and never called police. He was not ticketed.

MIAMI BEACH, Fla. — Buffalo Bills receiver Roscoe Parrish was arrested on a charge of driving under the influence, police said.

Sanchez said Parrish was taken into custody on a DUI charge. A Miami-Dade County jail spokeswoman said he was released later Saturday on $1,000 bond.

MIAMI (CBS4) – A student charged with stabbing a classmate Tuesday at Barbara Goleman Senior High in Miami Lakes says he acted in self-defense.

“He was choking me, and I couldn’t breathe and I obviously was concerned for my life”, said 18 year-old Frank Acosta in a Thursday interview with CBS4′s Gary Nelson.

Mauricio Padron, 17, was stabbed or cut several times Tuesday and was air-rescued to Jackson Memorial Hospital with what proved to be minor wounds. He was released from the hospital the next day.

Around 6:30 a.m., Trooper Lisa Drake saw Burton, 25, driving his blue Lexus east in the westbound lanes of State Road 84, just west of Southwest 136th Avenue, according to an arrest report. The car’s emergency flashers were on. Drake pulled the Lexus over and told Burton to get out of the car.

According to the report, his blood alcohol level was .106; the legal limit in Florida is .08.

Get in Touch With Us