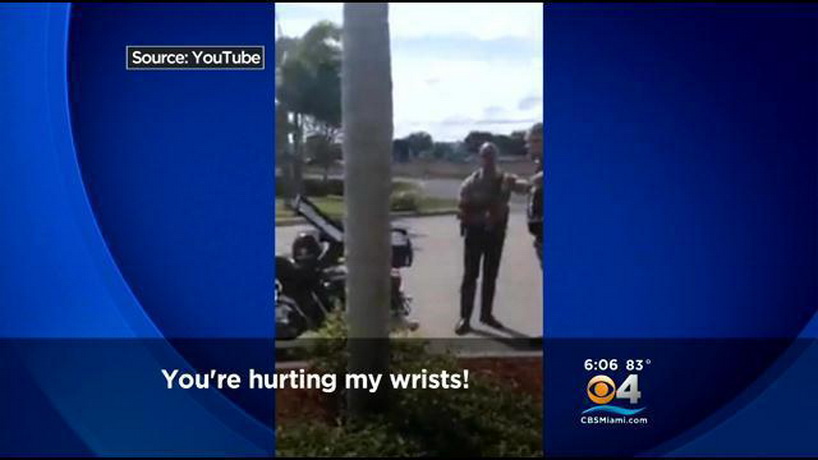 MIAMI (CBSMiami) – The charge against freelance disc jockey Lazaro Estrada is obstruction of justice. He was arrested on St. Patrick’s Day after using his cell phone to record a video of an arrest at a Southwest Miami-Dade store where he was spinning records for a promotional gig.

Estrada says he began recording the episode with his iPhone only after the officer removed Trigiano from the store and threw the handcuffed man to the ground.

The cell phone video begins with the officer standing on the sidewalk about twenty feet from Estrada, holding a handcuffed Trigiano by the arm. The cop tells two women who are much closer to him to back away, one of the women tells Estrada to move back. The officer then turns to Estrada and says something unintelligible, gesturing at him to get away. The video shows Estrada immediately beginning to back pedal up the walk and into the store where he remains – until pulled out by other arriving officers.

“I backed off into the building and I stayed behind the glass doors,” Estrada told CBS4’s Gary Nelson. “Obviously, all I had was my phone in my hands in clear sight…and he only told me once. I did what he told me.”

In the arrest report, Ofc. Valdez wrote that he gave Estrada “verbal commands to back away and he refused to do so.” The video shows Valdez waving Estrada off only once, and Estrada retreating inside the store, where he continued to record the arrest.

“I felt threatened by his presence,” Ofc. Valdez wrote of Estrada.

Other arriving officers quickly entered the store and removed a protesting Estrada.

“I can record all I want,” Estrada can be heard saying.

“I need your information,” an officer’s voice says.

“For what? What did I do wrong,” Estrada replies.

Ofc. Valdez then confronts Estrada, tearing into him. Valdez said he retrieved a handgun from Trigiano, who reportedly has a permit to carry a concealed weapon.

“The guy’s armed, three times my size, I’m telling you to back off,” Valdez recounts as other officers hold Estrada.

Estrada is represented by attorneys Frank Gaviria and Jonathan Perazzo who have taken his case pro bono, for free.

“At no point did he interfere, impede or obstruct the officer in the performance of his duties,” Gaviria told CBS4 News. “The video clearly shows Mr. Estrada was a very safe distance away from the officer.”

“Everybody’s walking around with cameras on their phones, and they should have a right to video tape officers in public,” Gaviria said.

“Just like police officers have their dash cams, private citizens have their cell phones. There’s no difference,” said Perazzo.

Estrada has something of a rap sheet, he’s been convicted of habitually driving with a suspended license, and was convicted of car theft eight years ago.

“That’s irrelevant,” said Gaviria. The attorney says Estrada is a hard-working father and the alleged cell phone recording abuse he suffered at the hands of police is on them, not him.

“The video speaks for itself,” Estrada said. “I complied with everything he (the officer) said for me to do.”

On the video, as the dust is clearing, Ofc. Valdez can be heard telling Estrada, “You’re going to be arrested.”

“For what?” Estrada counters.

“For, for, uh…” the officer’s voice trails off.

In the end, Valdez charged the cell phone-wielding man with obstruction of justice and resisting arrest without violence, both misdemeanors.

A spokesperson for the Miami-Dade Police Department told CBS4 News “the arrest report speaks for itself, and Mr. Estrada is entitled to his day in court.”